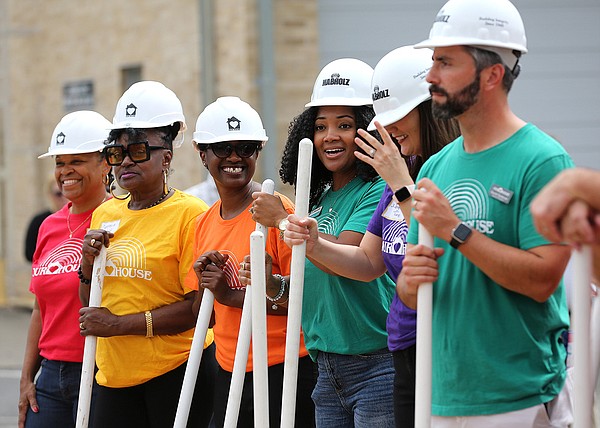 $2.5M in donations brings Our House of Arkansas closer to $16M goal for building expansion

Our House, a nonprofit dedicated to serving the Arkansans homeless, announced $2.5 million in donations on Thursday, bringing the organization close to the finish line of its campaign to raise $16 million for a building expansion slated to open next year.

Ben Goodwin, executive director, told a crowd at an official groundbreaking ceremony that about $450,000 is still needed to fund the 27,300 square foot project.

The organization provides transitional housing for families and individuals who are homeless or facing homelessness, with a focus on providing training programs and resources for career stability. The release says it serves 3,000 people a year.

Accommodation will be doubled by the expansion, increasing the capacity to 56 people, according to the statement. The early learner expansion and after-school program for middle and high school students will also be doubled.

“We have to turn away too many people,” the statement said. “Three hundred and sixty people in the month of October 2021 alone, including 49 families with 123 children. We have not increased our reception capacity for 17 years.”

The 35-year-old organization first approved the expansion in 2019, according to its website.

Goodwin said Thursday that the plan ran into a problem during the pandemic. Rising construction costs forced him to return to the board to make sure he still wanted to move forward, he said.

“They saw the need and they believed in the plan because they helped build our plan,” Goodwin said.

He said the board had clearly voted to continue.

A total of 211 donors have given to the campaign, which includes $11 million for new facilities and $5 million for an operating budget, according to a statement.

Goodwin said three of the donations were made in recent months.

The first was a $1.5 million matching grant from the Windgate Foundation. Another check for $1 million was mailed anonymously last week, and a third donation of $50.18 came from an 8-year-old girl who saved her allowance money for the cause. .

“Every donation, every act of service, every prayer and every word of encouragement is part of it,” Goodwin said.

Goodwin said the organization has helped thousands of people in the past and plans to help thousands more in the future.

“The most important part is our customer,” he said.

Hezekia Pierce, 54, said he first joined the Our House program in July last year. He was going through a breakup and his family and friends suggested he visit Our Home.

“I needed help,” Pierce said. “I started working in the field. It seemed like they just empowered you.”

It took time to accept the program, he says.

“I’m always the kind of person who tries to help others,” he said. “God said to let me lead. I was in the driver’s seat, but I climbed into the passenger seat. I was still trying to grab the steering wheel. When I got in the back seat, that’s when things started to happen.”

Pierce said he joined a six-month entrepreneurship class at Our House.

“I won first place in my class and they bought me lawn equipment,” he said.

Tery Young (center) and Courtney Darrow (left) drop pennies into a jar on Thursday after the groundbreaking event for the $16 million expansion of Our House in Little Rock. The pennies will be invested in the foundations of the two Our House buildings being constructed as part of the expansion. (Arkansas Democrat-Gazette/Thomas Metthe)