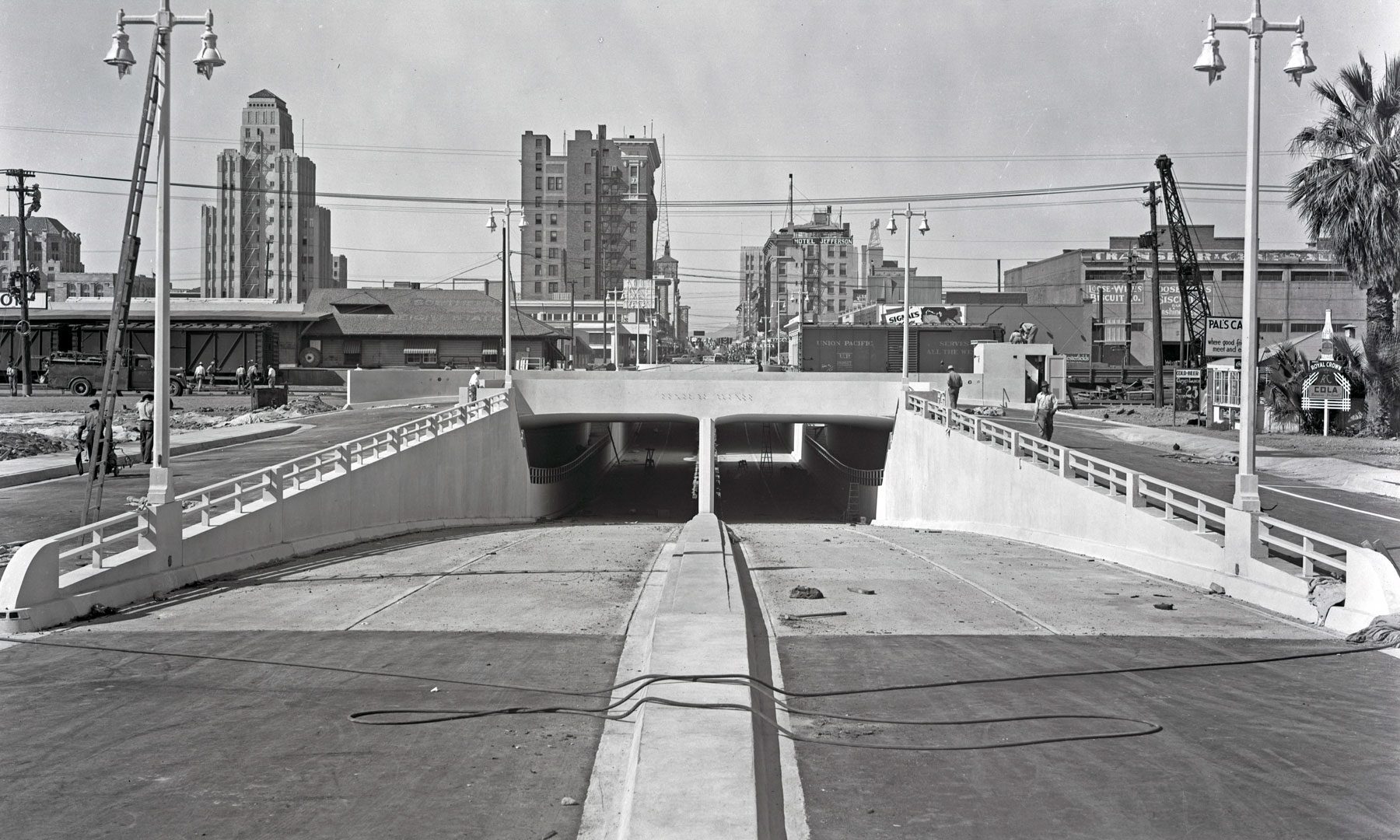 ‘A passage from one era to another:’ Construction of the Central Avenue Underpass – Downtown Phoenix AZ

Phoenicians who love subterranean lairs, or just the ability to sound their own horn, like to approach downtown from the south via the Central Avenue underpass. The beautiful streamlined concrete structure features winged and “Central Avenue” motifs rendered in aluminum letters on cantilevered pylons.

Completed in 1940 to run under the South Pacific and Santa Fe railroad tracks, the underground corridor has become one of the city’s most notable wormholes.

“It’s a passage from one era to another, from a modern art structure to a modern 20th century city of tall glass buildings,” says historian Donna Reiner. “The effect is even greater at dusk.”

In the late 1930s, 75 daily trains and their tracks were treacherous obstacles to the 14,000 cars that shuttled down Central Avenue between south Phoenix and downtown.

Before the construction of the underpass, accidents were frequent. Reg Manning, cartoonist for The Arizona Republicregularly satirized the crossing, drawing cars that reared and plunged like wild horses over the hazard of multi-lane traffic that locals called “stunts.”

The Arizona Department of Highways had used federal funds to build an underpass near 17th Avenue in 1935, which improved traffic flow along U.S. Highway 80.

As early as 1928, the Phoenix Junior Chamber of Commerce proposed the construction of a four-lane underpass on Central Avenue. The Great Depression delayed work until 1939, with the Arizona Department of Highways as designer/engineer and Lee Moor Contracting of El Paso, Texas undertaking construction.

In June 1939, the project began with the excavation and sinking of piles to support the trestles of the railway tracks.

A newspaper photo of the Central Avenue underpass a day after it opened, 1940. Photo: “The Arizona Republic”)

“At 18 I was a foreman and truck driver for JD Williams,” James Bond, 96, recalled in 2018. “We had the contract with Lee Moor to remove all the dirt in three months from under the tracks to make place for the new road.

Bond’s friend Robert E. Canion Jr. had just started Canion Construction and Excavation and was working on the project.

“I used my mules to compact the platform,” the 101-year-old said in a 2018 interview. Canion remembers driving his team of mules to work and home, much like a transport of cattle.

Robert E. Canion, Jr. and James Bond (left to right) pictured in 2018 during an interview with the author. (Photo: Douglas C. Towne)

Activity on the site came to a halt in November due to a strike called by the American Federation of Labor (AFL) to force Lee Moor to become a union-only company. Lee Moor settled with the AFL later that year, and the company completed the work on time in May 1940.

The underpass, designed to military standards, could accommodate two army light tanks traveling side by side in each lane. A modern electrical system has made the tunnel the best-lit section of the Phoenix Causeway.

The underpass opened with fanfare – speeches, a parade and street dancing, according to a 1940 Republic item. The Phoenix Union High School group drove a caravan of dignitaries in more than 50 motor cars through the underpass. Scouts handed out commemorative windshield decals to the first 5,000 vehicles to pass through the tunnel.

The Underground Corridor proved to be a safe and fast route that facilitated the development of the Warehouse District and South Phoenix. However, it is not known whether army tanks ever used the underpass.

About the Author: In 2018, to better understand the Central Avenue underpass that provided vital federal funds to Arizona during the Great Depression, Douglas C. Towne located and interviewed two local construction pioneers, James Bond and Robert E. Canon, Jr., who helped build the structure in their youth. Towne is a freelance writer, hydrologist, historian and artist.