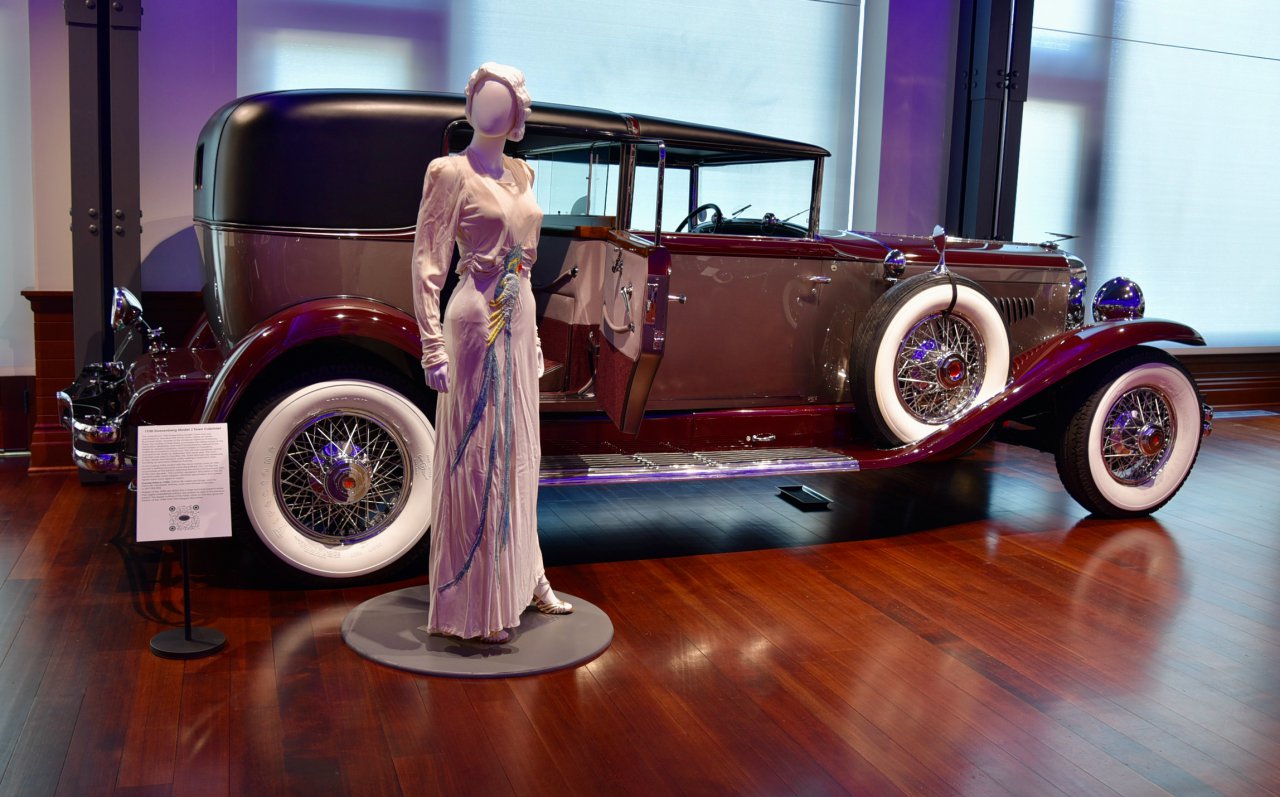 Bustles and hoops wouldn’t do, so fashion changed, but so did vehicles

The New York Times recently published a full-page article on how museums will need to reinvent themselves and not only survive but thrive in the post-pandemic world. Number 3 on the Top 10 list was â€œJoin and Co-Produceâ€.

And this is one of the things that the Audrain Automobile Museum in Newport, Rhode Island, made as a link with the Newport Historical Society in a double exposure. Until August 22, Audrain presents “Women take the wheel: fashion, modernity and the automobile 1900-1945”. Meanwhile, “The World in Motion: Fashion and Modernity” is presented at the Historical Society, where the focus is on fashion and showcases a hitherto unknown collection of clothing and accessories owned by women from the Vanderbilt family.

The New York Times recently published a full-page article on how museums will need to reinvent themselves and not only survive but thrive in the post-pandemic world. Number 3 on the Top 10 list was â€œJoin and Co-Produceâ€.

And this is one of the things that the Audrain Automobile Museum in Newport, Rhode Island, made as a link with the Newport Historical Society in a double exposure. Until August 22, Audrain presents “Women take the wheel: fashion, modernity and the automobile 1900-1945”.

Meanwhile, “The World in Motion: Fashion and Modernity” is presented at the Historical Society, where the focus is on fashion and showcases a hitherto unknown collection of clothing and accessories owned by women from the Vanderbilt family.

At Audrain, historic female clothing is on display with around ten vintage vehicles.

However, these exhibitions are not just a car and clothing show, but are designed to show how the automobile has changed women’s fashion and how women have influenced the automobile, said Donald Osborne, Managing Director of Audrain.

“Just about anything a middle or upper class woman wore in the 1880s didn’t even allow her to sit in an automobile, let alone drive one,” Osborne explained. â€œWomen’s fashion has been transformed by the automobile.

Consider the bustles and hoops, said Rebecca Kelly, a visiting scholar at the Historical Society, who also highlighted how materials used in women’s fashion have changed, with lighter fabrics used with the arrival of the automobile.

The automobile has not only allowed women to venture out into the world, it has also provided options on what to wear.

â€œBy the 1920s the automobile had evolved from a luxury toy for the very wealthy to a useful utility item, and as we see (in the exhibit) the automobile had to embrace style and design. fashion, and women were more involved in car decisions, â€he said.

the Gilmore Automobile Museum in Hickory Corners, Michigan, hosts its Annual Automobile Convention – a showcase for cars produced in or before 1942 – on June 26, and this year that date will also be Family Day on the museum’s rural campus.

“It’s time to inspire the next generation of car enthusiasts,” the museum notes as it announces family day activities that include vintage vehicle rides, $ 1 hot dogs, interactive exhibits , including a slot car track, a miniature car show, and more, including children’s pedal cars to drive for those who get behind the wheel.

“Holding Gilmore’s Family Day and Automobile Congress on the same Saturday in June helps us bring automotive history to life for kids,” said museum executive director Josh Russell, in the ad. â€œFamilies should consider joining us for this fun, educational and memorable day as we celebrate the first 50 years of the automobile and share the stories of generations of automotive pioneers and enthusiasts. “

A parade around the Gilmore campus of vintage vehicles, including those powered by steam, electric batteries and petroleum, is scheduled for 1 p.m.

When part of a family purchases an adult ticket, dads will be admitted free of charge to the Newport Automobile Museum in Rhode Island until June 23.

the Owls Head Transport Museum in Maine has auto shows on Father’s Day weekend on June 19 and 20 from 10 a.m. to 3 p.m. daily. The programs include not only a motor show, but also aircraft demonstrations and biplane rides.

the REVS Institute (Collier Collection) in Naples, Florida is planning a Hoods-Up event on July 19.

the AACA Museum in Hershey, Pa., will host a “Sizzlin ‘Summer Cruise In” from 8:00 am to 2:00 pm on June 19th. Among the features of the event there will be a visit by Jimmy Rosen, his book on vintage gas stations, Do you have gas?, and his 1947 Plymouth, and a Studebaker and Tucker parade.

Hi, I’m Paul Page: it’s race day in Indianapolis and its authors, Paul Page and JR Elrod, were to be presented from 10 a.m. to 2 p.m. on June 19 at Autobooks-Aerobooks in Burbank, California. However, the event was postponed until September 25.

There is more than cars to see in Beaulieu, England which is home to the National Automobile Museum. From June 19 to August 30, the Beaulieu Palace House will present more than 250 sculptures in its gardens and inside the Montagu family home. And June 19 is the date of the annual Simply VW show.

To celebrate Father’s Day, the Petersen Automobile Museum in Los Angeles will open the hoods of a dozen vehicles, including a Cisitalia 202 CoupÃ© from 1947, a Batmobile from 1989 seen in two films by Michael Keaton, a Ferrari 212/225 Barchetta from 1952 and a Jaguar XKSS from 1956 which belonged to previously to Steve McQueen. The hoods will be open from 10 a.m. to 5 p.m.

the Blackhawk Museum in Danville, Calif., hosts an auto show for Father’s Day on June 20.

Beaulieu and his National Automobile Museum and the Solent Renegades club are co-hosting a Hot Rod & Custom Show on June 20. The event includes the Vintage Pop-Up Market with retro clothing, housewares and auto accessories.

Van Halen 2, a tribute band, will perform at 8 p.m. on June 25 on the Gilmore Automobile Museum campus in Hickory Corners, Michigan. Funds from the $ 20 admission fee are used for educational tours of the K-12 museum and the Gilmore Garage Works High School training program.

the Miles through time The Clarkesville, Ga. Museum is holding its fifth annual auto show at the Old Clarkesville Mill from 10 a.m. to 2 p.m. on June 26.

Autobooks-Aerobooks in Burbank, Calif., features author John Zimmermann and Lost in Time: Formula 5000 in North America, from 10 a.m. to 2 p.m. on June 26.

LeMay – American Automobile Museum in Tacoma, Washington, launches a new exhibit, “Alfa Romeo: Born from Passion” with brunch with Italian Flair from 9 am to 11 am on June 26th.

the Gilmore Automobile Museum in Hickory Corners, Mich., is planning another of their live concerts at 8 p.m. on July 10 with The Spazmatics, billed as the “ultimate ’80s tribute band.” Unlike other events of this type at the museum, this will be a ‘walk-in’ concert with visitors invited to bring folding chairs or blankets for the event.

the British Automobile Museum in Gaydon hosts the BMC & Leyland Show on July 11, a gathering of vehicles from British Motor Corporation, British Leyland and Rover Group. This year marks the 50th anniversary of Morris Marina, a historic rally exhibit by the Historic Marathon Rally Group and the Mini Cooper Registry, as well as an emergency service vehicle exhibit.

It’s “Simply Vauxhall” on July 17th at National Automobile Museum in Beaulieu, UK, where Vauxhall vehicles will come together for a show. The next day, the museum welcomes its â€œSimply Fordâ€ showcase.

The inauguration North East Motorsport Museum Around the Lake rally-tour is scheduled for July 31st. The event begins at the museum in Loudon, New Hampshire, and will take scenic drives to the Vintage Racing Stables car collection in Sanbornton. the event is limited to vehicles from 1972 or earlier.

With so many events canceled in 2020, the British Automobile Museum in Gaydon will turn the Gaydon Land Rover Show scheduled from July 31 to August 1 into the off-road automaker’s 50th and more anniversary. â€œWe are looking forward to having a late birthday celebration,â€ said show director Tom Caren.

Does your local auto museum have any special events or exhibits planned? Let us know. E-mail [email protected].