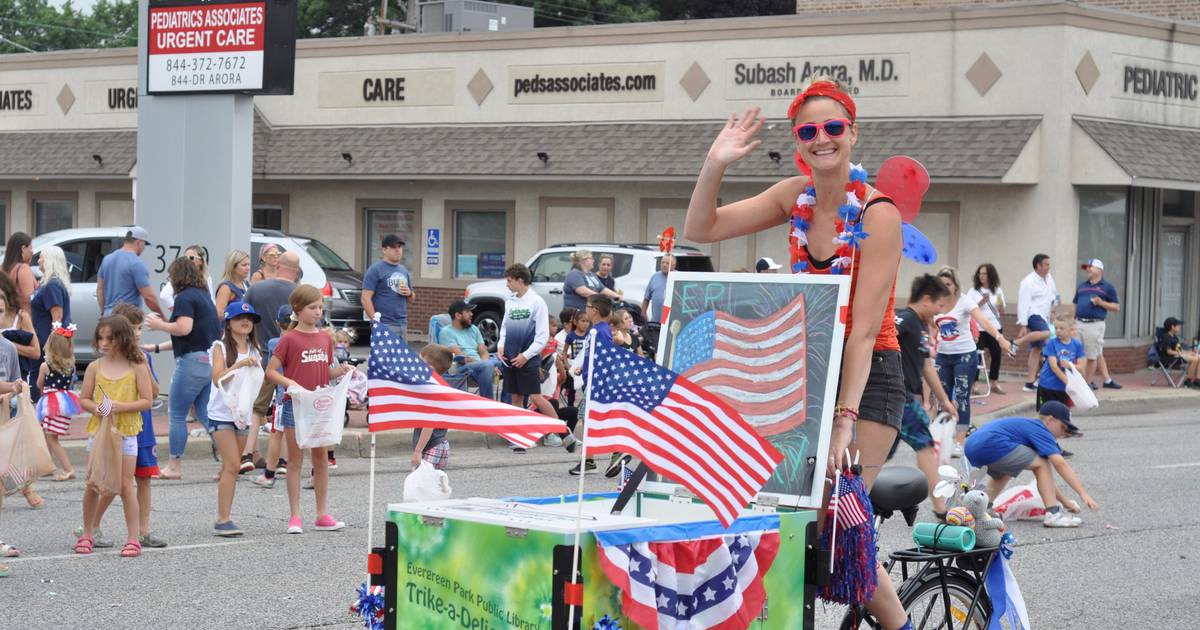 With blaring sirens and flashing lights, police and fire crews announced the return of a long-standing Evergreen Park Independence Day tradition after its absence for the past two years.

Marching bands, elected officials, schools, neighborhood groups and a hail of candy followed among the approximately 75 participants featured on July 1 in the village’s annual Independence Day Parade, which usually takes place the Friday before the 4 July. The parade started at 6:30 p.m. from 95th Street and Harding Avenue, east of Richmond Avenue, then headed north to end at 91st Street.

Stacy Schuble, Evergreen Park’s marketing and communications manager, said the village received many calls ahead of the parade asking for information and to make sure it was back this year, after it was canceled in 2020 and 2021 amid COVID-19.

“Everyone is thrilled to have him back and feel a bit back to normal,” Schuble said.

While parade participants were largely familiar, the Catholic parishes of St. Bernadette and Reine des Martyrs officially united on the day of the parade. Thus, the pastor of the United Church, the Reverend Benedykt Pazdan, took advantage of the celebration to ask the families of the school and the parishioners to decorate a float.

“It’s a wonderful thing to come together and join forces and show the community at large that we look forward to a wonderful future,” Pazdan said. “They are truly willing and open to working together and making the most of it, leaving the past behind and moving forward with this positive vision of what a new parish family can be.”

Pazdan led the tank while riding a motorcycle. He said he got his license when he was 18 in Poland and again when he came to the United States.

“I really like that feeling of freedom,” he said. “And it can be an icebreaker. … I like that a lot.”

Olympic hockey silver medalist Abbey Murphy, an Evergreen Park resident and graduate of Mother McAuley Liberal Arts High School, was Grand Marshal. Mayor Kelly Burke, who was sworn in as Evergreen Park’s first female mayor in May 2021, was also among those attending.

“We’re really excited to have the parade back,” Burke said. “This is my first fashion show.”

But the parade was mainly geared towards tradition. It included the Chicago Stockyard Kilty Band and the Jesse White Tumblers, attendees enjoying Barraco’s curbside pizza, sidewalk barbecues in neighborhoods and many people watching the parade as children brought their own offspring to see it.

The Medinah Shriners, a philanthropic group known for their Shriners Hospitals for Children, returned with seven of their toy cars in a variety of colors with figure-8 designs.

“It’s fun,” said Miles Barler, who was the parade manager for the group. “We do it for our Shriner children, but we also do it for ourselves. We have a lot of fun doing it to help the kids.

Barler said parades for the Shriners have been low since March 2020, but this year they are finally closing in on the 45-50 appearances the club typically makes per year. It’s a great feeling to be in front of the crowd again, and Evergreen Park is always a highlight, he said.

“They’re a big crowd,” Barler said. “95th Street, lined on both sides, everyone cheering, everyone having fun. It’s a big parade to come to.

The Evergreen Park Independence Day Parade began in 1968 as a special attraction for the village’s 75th anniversary celebration, Schuble said. The parade never missed a year until 2020.

That means Ken Kazin, band director for Evergreen Park High School, has been there with his student musicians for 34 of his 36 years at school, always with a gig before or after the parade.

“We are very connected with the community and the parade itself,” Kazin said.

Because the parade always takes place on a Friday, Kazin said it kind of kicks off Fourth of July celebrations for Southland and always draws a good crowd.

“People make it special,” Kazin said. “There’s a special breed here on the South Side – at Evergreen Park, Oak Lawn, this area. It’s a tight-knit community.”

News from the southern suburbs delivered every Monday and Wednesday

Just before the parade, as attendees lined up, the high school band section leaders performed “Happy Birthday” for 1-year-old John Moriarty, who was celebrating with his family on their front lawn. John’s mother, Christina Moriarty, said a cousin asked the band to play.

“It was so cool to have them perform,” she said. “It makes us happy to be part of Evergreen and this neighborhood.”

The family moved to Evergreen Park four years ago and have missed the parade festivities like everyone else for the past two years. They got a unique look at the attendees before most attendees from the comfort of their own homes.

“We wanted her birthday to be on the same day as the parade, because it’s so cool to see them line up in the street,” Christina Moriarty said.

Fireworks followed at dusk at Duffy Park, 92nd Street and Millard Avenue. And for the second year, Evergreen Park held an Independence Day decorating contest. People were urged to channel both their patriotic and artistic flair into decorating their homes and yards ahead of June 28. One winner in each of the village quadrants will be selected and announced after the holidays to win restaurant gift cards, Schuble explained.

“It seems like the community likes to participate in this and see what they can do with their homes,” Schuble said.

Bill Jones is a freelance journalist for the Daily Southtown.