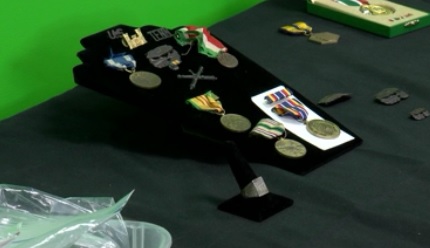 LITTLE ROCK, Ark. – At Goodwill Industries Arkansas, employees sometimes stumble upon military artifacts from WWI and WWII. Instead of putting them on the shelf, they put them aside in the hope of returning them to family members.

As Goodwill employees sift through boxes and donation boxes, sometimes they come across something that stops them in their tracks.

“Wow, that could be something. Oh my God, what do I have in my hand, ”said Todd Ray, Goodwill Jewelry Sorter.

For Ray, every day is like a treasure hunt. Instead of gold, his greatest finds are medals and pins from those who served red, white, and blue.

“These people have sacrificed part of their life or their whole life to defend our country,” said Ray.

He is a history student and imagine his excitement when he stumbled upon a ring from WWII.

It is hand engraved by a soldier in the trenches.

“Just to kind of commemorate their presence. This one is from Tunisia, ”said Ray.

It wasn’t even the oldest trinket in the box. He also found a World War I victory medal.

“It’s over 100 years old. Finding the trick is like touching a piece of history, ”said Ray.

Sometimes these finds are accompanied by clues to whom they originally belonged, others leave no trace.

“Unfortunately, he had no name, no initials,” Ray said.

“Hear their actual stories about what all of these objects have been through, where they came from, who it all has been and what age,” Williams said.

She helps with Google search and will even take photos for social media.

“They are our best tool,” said Williams.

They keep these service symbols to try to find the rightful owner.

“It was for their blood, their sweat and their tears that they fought and sacrificed themselves. They deserve to get this back, ”said Ray.

If you know who the ring or medal might belong to, contact Goodwill Industries of Arkansas. After a thorough search, if they still cannot find the owner, they will donate the items to the museums.