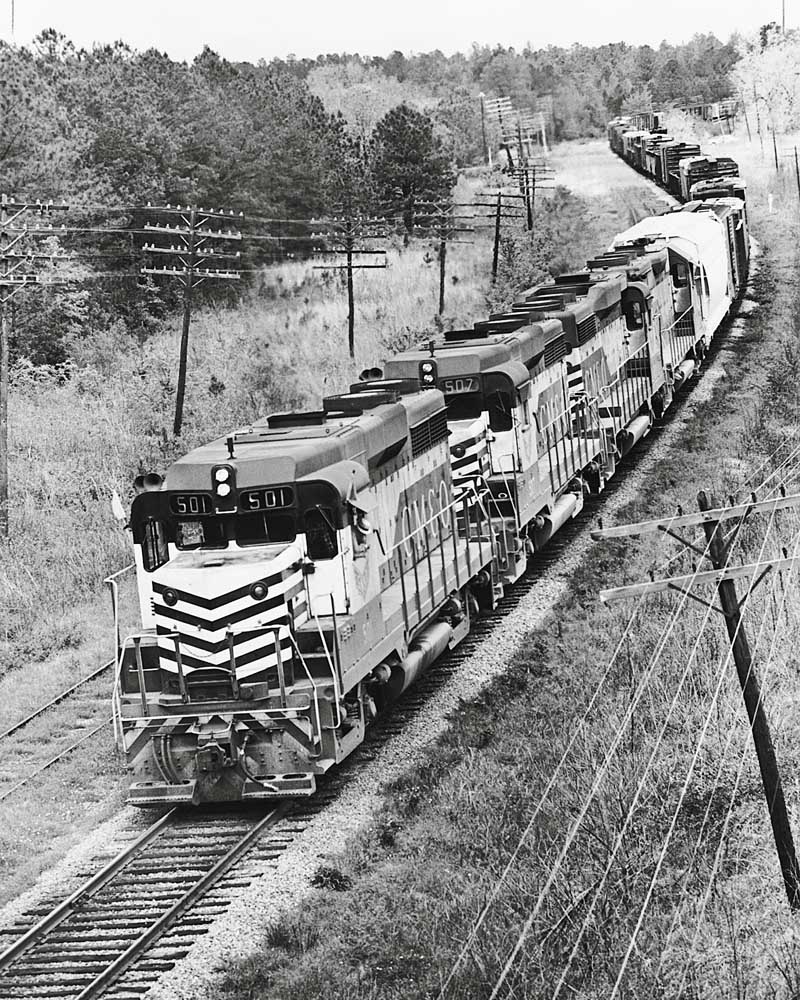 Gulf Mobile and Ohio Recall: The “modern merger movement” is often said to have begun in 1957 when Louisville & Nashville absorbed Nashville, Chattanooga & St. Louis, three-quarters owned by L&N. Some would argue that three similar 1947 mergers – Denver & Salt Lake into Denver & Rio Grande Western; Alton Railroad in Gulf, Mobile & Ohio; and Pere Marquette in Chesapeake & Ohio – should mark the beginning of the movement. In all four cases, however, the surviving carrier already had an interest or some control over the “fallen flag”.

Omitting the interruption of World War II, a significant merger occurred just before the first three above, in the fall of 1940 – the creation of GM&O itself. Some would argue that the creation of GM&O — a classic “parallel merger” — set the tone for railroad mergers in the second half of the 20th century.

GM&O was formed from two Deep South carriers: 827 miles Gulf, Mobile & Northern and 1,180 miles Mobile & Ohio. GM&N reaches from the ports of Mobile, Ala., and New Orleansto the north, joining Union, Miss. (between Jackson and Meridian), en route to the town of Jackson, West Tennessee, while M&O, which skirted GM&N 25 to 30 miles to the east, moved from Mobile to Meridian, Miss., and Jackson , Tennessee, to the metropolis of St. Louis.

Both partners had colorful histories dating back to the mid-1800s. As was the case with GM&O, it retained the silver and crimson colors of predecessor Gulf, Mobile & Northern’s 1935 stream-liner Rebel (leaving Southern Terminal Station in New Orleans, above, aged 10), and applied them to his first diesels, such as the 1940 S1 664.

Many railroads, each to its own, grew out of mergers of smaller lines, including logging and narrow-gauge pikes. GM&N’s thin-gauge predecessor, the Ripley Railroad in northern Mississippi, predated Colorado’s better-known narrow-gauge, and so did M&O’s 3-foot narrow-gauge predecessor in southern Utah. Illinois, St. Louis & Cairo. The M&O tracks north of Corinth, Mississippi, had been the objective of opposing armies in the Battle of Shiloh during the Civil War, and M&O suffered severe damage in the fighting around Meridian. GM&N was the evolution of several back-to-back mergers and reorganizations of minor roads that exploited the hilly and heavily forested areas of southern and central Mississippi. Forest products and related paper products would be a staple of system traffic for over a century.

The man behind the GM&O was Isaac Burton “Ike” Tigrett (TY-gret), a banker from Jackson, Tennessee. He had been appointed GM&N Receiver when it came out of government control after World War I, and his corporate philosophy was “growth by merger and looking after shareholders first.” Tigrett surrounded himself with executives who would think in unconventional ways, rare in the stuffy railroad industry.

Mobile & Ohio had been bankrupt during the Great Depression and was controlled by the Southern Railway. When Southern offered the M&O for sale in the mid-1930s, Tigrett saw an opportunity to protect and strengthen GM&N’s territory and expand its reach to the front door of St. Louis.

To that end, he incorporated the Gulf, Mobile & Ohio in November 1938 and led the purchase of the M&O, completed on September 13, 1940. His timing was propitious, as the increased traffic caused by World War II allowed the new company to thrive beyond anyone’s expectations.

Tigrett was an innovator with both GM&N and GM&O. The merged carrier was the first major Class I route to dieselize, and it used gasoline-electric (later, diesel) engine cars extensively for local and secondary passenger service. Prior to the merger, GM&N of Tigrett joined the streamlining trend by introducing in July 1935 the lightweight diesel-powered Rebel connecting Jackson, Tennessee and New Orleans. Just weeks after the merger, Gulf, Mobile & Ohio improved its passenger service with full-size cars on the St. Louis-Mobile Gulf Coast Rebel, powered by new Alco DL109 diesel engines. (As a result, the three rebel pioneer trains were called “the little rebels”.)

Tigrett didn’t stop at St. Louis. He had his eye on Chicago, and a golden opportunity for further expansion presented itself in 1943 when the bankrupt Alton Railroad was put up for sale by owner Baltimore & Ohio. The Alton, which B&O had renamed “Chicago & Alton” in 1931, two years after purchasing the route, had two routes from St. Louis. The main line, which dated from the Alton & Sangamon of 1847, ran to Chicago; the other went to Kansas City.

By purchasing the Alton, Tigrett’s goal of creating a railroad from the Gulf to the Great Lakes would be realized; Kansas City was almost an afterthought. B&O’s goal with the Alton had been to break through the invisible east-west wall of the Mississippi River, as only the Wabash had otherwise done, but this was ultimately thwarted by other great eastern routes, so with little freight traffic on the Alton, B&O sold it. The directors of Gulf Mobile and Ohio agreed to Tigrett’s plan in early 1945. After some delay by the Interstate Commerce Commission, GM&O and Alton were united on May 31, 1947.

The merged carrier retained the Gulf, Mobile & Ohio name, but Tigrett was savvy enough to overwhelm “The Rebel Route” slogan and adopt “The Alton Route”, since Alton was the premier passenger carrier on the fast and competitive Chicago -St. Corridor Louis. GM&O also carried over to Alton colors, ditching silver and crimson for Alton red and maroon with gold trim, in which even pre-merger FAs came. The merger transformed a small, profitable Class I serving a Deep South region with an agriculture-based economy into a 2,900-mile intercity line serving Chicago, St. Louis, and Kansas City. But in many ways Gulf, Mobile & Ohio continued to be “two railroads in one”. The northern region and the southern region (or “north end” and “south end”) had a different character, as did their driving force, until the 1960s.

In the South, Alcos reigned supreme, but in the North, it was diversity. While the Alton had acquired 10 S2s and 10 RS1s just after the war for yard work and premises, the EMDs ruled the road. Alton had inherited two EMC passenger units from B&O, a boxcab and a streamlined EA, and had also obtained seven of the early E7s. Orders for F3 (by the Alton, delivered as GM&O) and F7 followed. The fleet totaled 28 F3s and 14 F7s, with 12 F3s (9 cabins, 3 boosters) fitted with steam boilers and used for both passenger and freight. With 34 RS1s, 14 RS2s and 9 RS3s for local freight, GM&O never owned a Geep until the second generation. In the late 1950s broken crankshafts, particularly on FAs, occupied workers at Iselin stores in Jackson, Tennessee, but officials received no such complaints about Fs from the old Alton stores in Bloomington, Illinois. in terms of its new GP30, GM&O therefore struck a deal which, from 1962 to 1965, would see all Alco road units (plus the single Ingalls road switch and GM&O’s only Baldwins, a pair of passenger cabs) exchanged for 31 GP30s and 48 GP35s, which ran on the FA trucks and retained their Westinghouse traction engines. EMD designed the black and white livery of the Geeps, as well as the later red and white schemes on the follow-on SD40 and GP38.

In the south, the Gulf, Mobile and Ohio main lines sailed on a hilly profile and were unsignalled. Although well maintained, the track didn’t really feel like a Class I railroad. The rail wasn’t heavy and the subgrade wasn’t impeccably groomed or heavily ballasted. Conversely, the former Alton Chicago-St. Louis main, being a high speed passenger railroad, had block signals – distinctive B&O style colored position lights, only now finally being replaced. Quietly progressive, GM&O in the 1960s installed CTC signage on the Alton and followed it to a single lane.

I once heard the GM&O describe it favorably as a “3,000 mile short line”, which the Southern region surely seemed like. Despite appearances to the contrary, GM&O was a profitable business, thanks to conservative management and a strict attention to customer service.

Even as GM&O modernized, Brock, elevated to president in May 1957, finally saw in its largest parallel competitor, Illinois Central, the familiar parallel merger “written on the wall.” So, in the mid-1960s, Brock began the discussion process that, two and a half decades after the Alton acquisition, would culminate in the next merger, with IC taking control of GM&O. This happened in August 1972, with IC adding Gulf to its name.

Much of the original GM&O is gone, but not the Alton. Short lines and Kansas City Southern operate some segments in the south, and KCS also owns the St. Louis-KC line. Most of Chicago-St. Louis is owned by Union Pacific and is being upgraded to a higher-speed passenger route for improved Amtrak service (Chicago-Joliet remained with IC, now Canadian National). As difficult as it may be to comprehend, Gulf, Mobile & Ohio has now disappeared for roughly the same amount of time it existed and has carved a lasting niche in our memory.