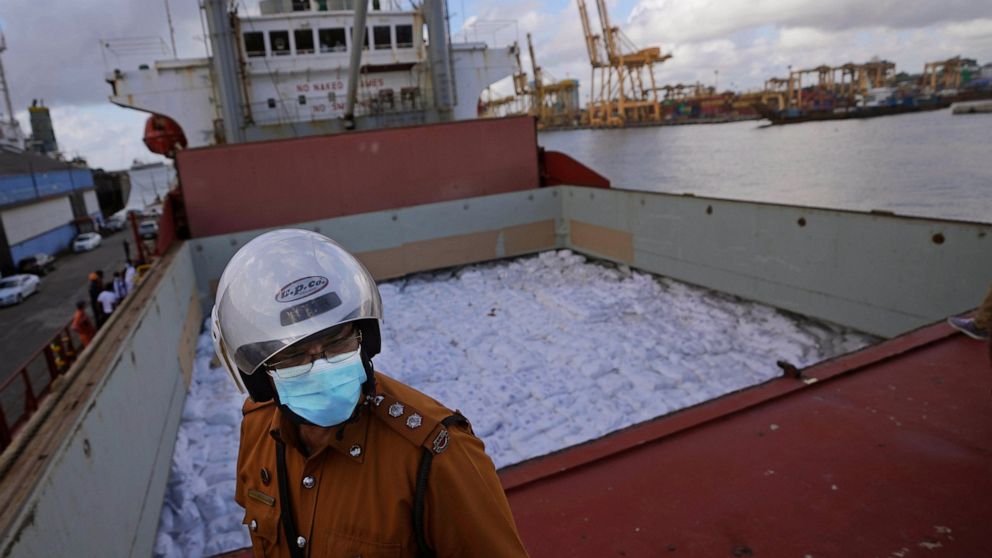 India sends food and medicine to Sri Lanka in crisis

Gopal Baglay, India’s envoy to Sri Lanka, handed over the donation from the southern Indian state of Tamil Nadu to Sri Lanka’s Foreign Minister Gamini Peiris on Sunday evening. The goods, worth $5.6 million, include rice, milk powder and essential medicines.

They will be distributed to vulnerable families in different parts of the country, the Indian embassy said in a statement.

Sri Lanka is on the verge of bankruptcy and battling severe shortages of basic necessities, ranging from food, fuel, medicine and cooking gas to toilet paper and matches. For the past few months, people have been forced to line up to buy the limited stocks.

The country’s new prime minister said last week that petrol stocks had reached their last day, exacerbating transport problems and lengthening queues. But gasoline shipments paid for through an Indian line of credit started arriving over the weekend.

Sri Lanka has suspended repayment of about $7 billion in foreign loans due this year out of the $25 billion to be repaid by 2026. The country’s total external debt is $51 billion.

In addition, India has provided $3.5 billion in economic aid in the form of loans and buyer credits for food, medicine and fuel.

Sri Lanka’s economic crisis has created political unrest with a protest occupying the entrance to the president’s office demanding his resignation which has been going on for 40 days. Earlier this month, government supporters attacked the peaceful protesters, sparking riots across the country in which nine people, including a lawmaker who was beaten to death, were killed.

Many houses and properties of incumbent ministers and ruling party politicians were burnt down. President Gotabaya Rajapaksa has declared a state of emergency, giving police and military sweeping powers to search, arrest and detain suspects.

The emergency lapsed last Friday because the government failed to seek parliamentary approval within 10 days, as required by the constitution.

Protests calling on the president and his family to quit politics led to a near dismantling of the powerful Rajapaksa dynasty, with the president’s brother Mahinda Rajapaksa stepping down as prime minister. Before that, two of the president’s siblings and a nephew resigned as ministers.

The president himself faces the prospect of having his powers drastically reduced to bolster parliament under Prime Minister Ranil Wickremesinghe, who is leading negotiations with the International Monetary Fund for a bailout.

A constitutional amendment aimed at restricting the powers of the president is expected to be discussed in the Council of Ministers later on Monday.

Tamil Nadu, which shares language and culture with Sri Lanka’s Tamil minority, is separated by a narrow strait from the island’s Tamil-majority north. The donation was prompted after dozens of families fled to Tamil Nadu due to the economic crisis.

Student Loan Forgiveness: You Could Save Nearly $2 Million in Retirement