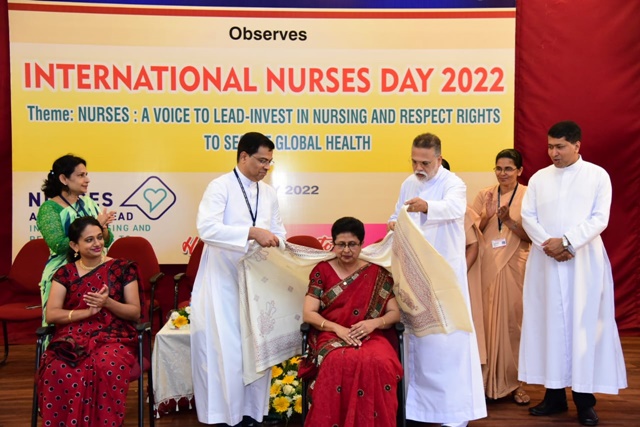 Mangaluru, May 12: The Nurses Week celebration kicked off on Saturday, May 7 at the grounds of Asha Kiran. After invoking the blessings of the Almighty, Helen Lobo, Nurse Superintendent, welcomed the gathering.

Father Rudolph Ravi D’Sa, FMMCH Administrator, Principal Guest enlightened nurses on the theme emphasizing the true value of nurses to the people of the world and appreciated the nursing fraternity of Father Muller Medical College Hospital for their dedication to the profession. Sr. Dhanya Devasia, Chief Nursing Officer, FMMCH presented a gift to the main guest, Fr. Rudolph Ravi D’Sa, as a token of appreciation. The director, Fr. Richard Coelho, gave the presidential address and thanked the nurses for their tireless contributions to healing and comforting the sick in the hospital. He also encouraged nurses to participate in the activities planned during Nurses’ Week. The inaugural event concluded with a vote of thanks offered by Renita Lasrado, assistant nurse superintendent and coordinator of CNE, Father Muller Medical College Hospital. The inauguration ended with the institutional anthem followed by a distribution of sweets.

In view of the time factor, the Department of Nursing Services held literary art competitions. These events were held for nurses and care aides from April 28 to May 4 ahead of the official inaugural celebrations. A test on the subjects of continuing nursing education was carried out on February 9 and 10 for staff nurses and on April 29 for ward managers. Nurses and hospital assistants were divided into seven teams to facilitate active participation from all settings. There was indeed active participation in all activities. A conference on Happy Nurses – A Kind Smile Cures Illness was held on May 6 at 3:00 p.m. in the conference room of the hospital. Father Rudolph Ravi Dsa was the guest speaker. The ANS, department heads and staff nurses were present. A symposium on the theme of the year was organized on 9 and 10 May. It was informative and well appreciated by the public.

International Nurses Day and the closing celebrations of Nurses Week 2022 began with a Eucharistic celebration of thanksgiving at St. Joseph’s Chapel. During the Mass, the nurses brought groceries and household items to be distributed to poor households caring for the sick and the elderly.

The congratulation and finale of Nurses Week was celebrated at Academy Hall. A prayer song performed by the nurses filled the atmosphere with admiration. Sr. Deepa Peter, Principal of Athena College of Nursing, graced the program as a key guest and Fr. Richard Aloysius Coelho, Director of Institutions, was the Program Chair.

Sr Dhanya Devasia, Head Nursing Officer gave a warm welcome to the assembly. It was followed by a tribute to two stalwarts for their services to struggling society, Father Augustus Muller, founder of Father Muller’s Charitable Institutions and Florence Nightingale, founder of modern nursing. Their portraits were garlanded by Father Richard Aloysius Coelho, Director of Father Muller’s Charitable Institutions and Sr Deepa Peter, Principal of Athena College of Nursing as a sign of respect. A report of Nurses Week 2022 activities and events was read by Renita Lasrado, Assistant Superintendent Nurse and CNE Coordinator, Father Muller Medical College Hospital.

Sr. Ellen Marie was honored for her selfless contributions to the service of the sick and suffering in these institutions in various capacities. In her post, she advised nurses to seek inner peace rather than outward manifestations. She remembers her fight to reach the position of nursing superintendent, while being a nun. His vocation and his profession corresponded, both had the nature of caring and nurturing.

The best tester of the CNE, the best nurses and the panelists of the symposium were congratulated by the guest of honor.

1. The Late Geetha Srestha Memorial Prize is awarded to Precilla Rodrigues as the best district
In charge

2. The Late Annie Theresa Coelho Memorial Award is given to Simi Mathew as the best senior nurse.

3. The prize instituted by Mgr PM Saldanha, goes to Jobile Jose, as the best nurse.

The main guest, the message to nurses was that every person deserves to be treated with dignity and that nurses are the ones who respect it. Nurses instinctively participated in the healing and care of the patient. The pandemic has shown the dedication of nurses and their importance in an organized healthcare system.

Malini Noronha and Carol Queen D’Souza were congratulated with a shawl and sapling by the dignitaries in recognition of their recognized skills and as a sign of appreciation among the multitude of nursing staff.

Father Richard Coelho, Director of Father Muller Charitable Institutions, praised the nurses and prayed that nurses around the world would be a beacon of healing and care. Nurses are part of the care team, without them the void is immense. He suggested that while pay might seem like the priority, the joy of serving another human being should come first.

The program ended with a vote of thanks offered by Lavina Nazreth, Assistant Superintendent Nurse, and was followed by a short cultural program and lunch.