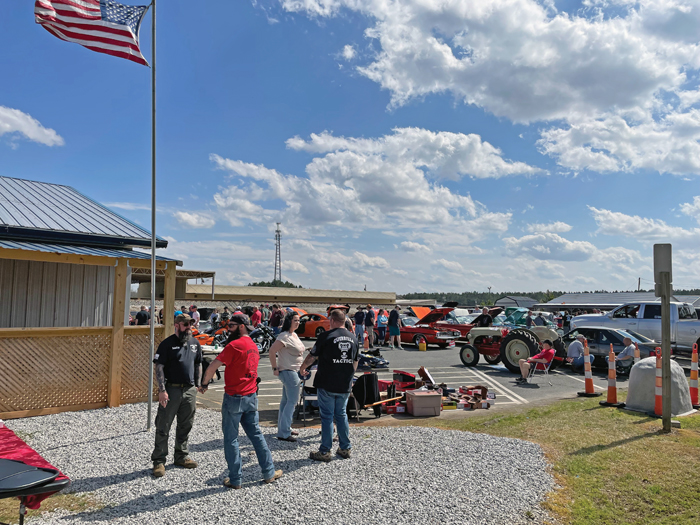 Nearly two dozen owners of vintage and custom cars, trucks and bikes entered their rides, some of which were recognized in multiple competitions. The event included raffles, food and drink vendors, music and a live auction. After announcing the winners in each category around 3 p.m., organizers had already received at least $4,000. This does not include final sales of food, beer and t-shirts at a performance by Tracen Hollow, a Southern country rock band, on Saturday night.

While organizers say they don’t yet know where proceeds from Saturday’s event will go, last year’s event raised $5,565. These funds were donated to the WG Bill Hefner Salisbury VA Medical Center for palliative care and the hospital’s general fund. Robert Honeycutt, the event organizer and a son of the American Legion, said all proceeds will help homeless veterans in some way.

“I love doing this,” Honeycutt said. “I don’t do it for recognition. I feel like I deserve to do this for our veterans. I’m proud of it.

Lisa and Ray Bolen said they stopped around 7:30 a.m. and saw cars already lined up waiting to enter the salon. Ray said he enjoyed the wide variety of cars and urged others to attend events like this to support causes that help veterans.

“That’s why we can do things like this,” Lisa said. “Because of them.”

Windy, sunny 70-degree weather on Saturday made Chris Mathis’ 85-mile motorcycle ride from Wilkesboro enjoyable. Mathis said checking out older model cars proves that anyone can work on vehicles themselves.

“These old cars, you just need a screwdriver and a pair of pliers to make them run better,” Mathis said.

Ted Rary said he had been around cars all his life as his father was a mechanic who had old cars and rode a motorcycle. Rary became interested in motorcycles, working part-time at Jaybird’s Custom Cycles in Salisbury. Rary said attending auto shows can help spark ideas for his own projects.

“It’s just the way I grew up,” Rary said. “And you meet some of the greatest people here.”

Rary added that he hopes to see this event continue for years to come and “go beyond the parking lot”.

Amanda Honeycutt said there was virtually no cost to organize the event, as many sponsors donated items, including Budweiser, Target, Pepsi, Lowe’s and Honeycutt Lawn Care. Amanda Honeycutt said this year’s event was smaller since last year there were around 76 entries. She thinks the chance of rain could be a factor, but Saturday’s event still attracted several dozen visitors and car owners.

A number of entries were rewarded with first, second and third place prizes: