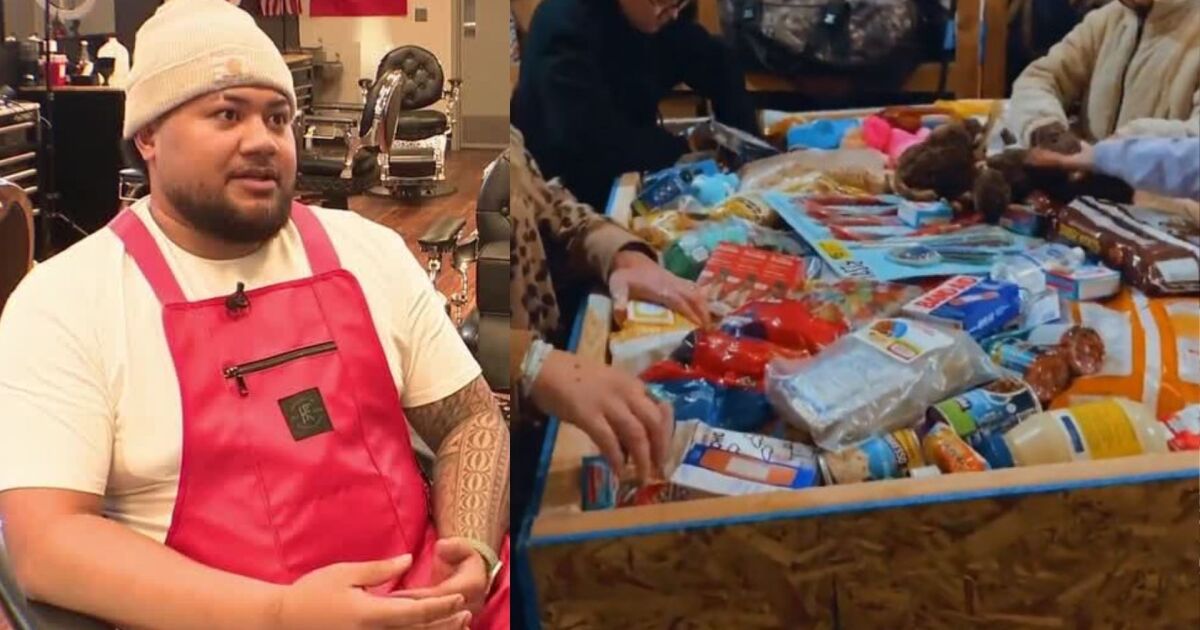 PLEASANT GROVE, Utah — Barbershops have always been gathering places for members of the community.

As a center of beauty and conversation, it’s only natural that Fresh Fade Away Hair Salon in Pleasant Grove is a place for those talking about a disaster halfway around the world.

The shop is owned by Nafe Latu, a Tongan American who arrived in the United States in 2011.

He was chasing his life’s dream, and it came true when he opened his shop.

“Since I opened the shop, I was a great community guy,” Latu said Friday.

But the day a tsunami hit Tonga nearly two weeks ago, he had a heartbreaking phone conversation.

Latu’s brother was on the other end.

“When I called him, he was evacuating his entire family,” he said. “Everything he told me [is] it was raining pebbles, then the conversation was cut off. And when I called back, it didn’t work.

The following days were difficult. No contact with the island nation for anyone meant they didn’t know what happened.

Through worry and fear, he had an idea: to use the barbershop as a way to gather things to send.

So Latu decided to ask for supplies donations on the shop’s Facebook page, and “it just blew up.”

Every day, the store owner received new things, even from people who had never been to his store before.

“It’s pretty mind blowing to see how much we’ve actually gotten from the community,” said Tanner Orton, another barber at the store. “It was awesome. It was really cool…to be a part of it.”

The whole shop started taking supplies and putting them in the back room.

The goal at the start was to fill a large 84″ x 48″ x 48″ shipping crate with supplies, which was a very ambitious goal.

“By the time it arrived on Sunday, I’m like, looking at the whole giveaway and I’m like… ‘We could be in trouble,'” Latu said with a laugh.

Not the kind of problem as in too little, but as in too much.

Donations exceeded expectations and a second shipping crate was needed for the excess.

After just a week of donations, they had to close the drive on Thursday because they had filled three shipping containers – filled to the brim with supplies the island nation’s residents desperately needed.

CAN YOU BELIEVE THIS? All of these donations are thanks to the community that has rallied around the Fresh Fade Away Barbershop in Pleasant Grove. The crates you see here are already on their way to the island nation of Tonga. Hear their amazing story only on @fox13 at 9 o’clock! pic.twitter.com/EkdiOydmbU

There was one thing that Latu said absolutely needed to be in the crates, and that was Irish Spring soap.

“I came across Irish Spring soap,” he said, becoming emotional, “and told my guys the smell of Irish Spring, when I was a little kid on the island. .. it was the taste of America.”

With plenty of Irish Spring to bring the feeling of America to those on his home island, he and others packed up the load and sent it on Thursday night.

Luckily he has reconnected with his family and hears there is a lot of devastation where they live, but luckily everyone is fine.

The containers are heading to his brother for his family to distribute, but his brother has no idea how much is to come.

“He’s super excited, but he doesn’t even know how many things are going on… [to] come his way,” Latu said. “It’s a great experience, and I’ll never forget what it feels like…walking into the store and seeing all the donations.”